On Saturday, September 24th the conductor of Boston Symphony Orchestra, Latvian-born, Andris Nelsons gave a brilliant start to Russian Seasons in Boston, with the Gala-opening of an all-Russian program featuring superstar Chinese pianist Lang Lang. Opening the concert was the fleshy and cheerful Festive Overture by Dmitry Shostakovich, the Soviet ceremonial piece composed in 1954 for the Bolshoi Theater. Continuing the program, Lang Lang was a soloist in Sergey Prokofiev’s brilliant, virtuosic and witty Piano Concerto #3. He received a standing ovation and gave an encore following the performance. The concert concluded with an outstanding orchestration of Modest Mussorgsky’s “Pictures at an Exhibition,” with its powerful piece ‘The Great Gate of Kiev.” The wonderful connection is that French composer Maurice Ravel created the instrumentation of solo piano of Pictures at an Exhibition at the request of BSO conductor Serge Koussevitsky, who led the premiere in Paris and Boston in 1922-1924.

It was great to be the part of such an emotional experience and see how enthusiastic the Symphony Hall audience was in welcoming an all-Russian program! Nelsons, who studied conducting at the Saint Petersburg Conservatory, will perform in the upcoming BSO season (www.bso.org/Performance/Listing) more Russian music, including Sofia Gubaidulina’s Trio Concerto for the unusual combination of violin, cello and bayan, in February 2017.

The Rimsky-Korsakov String Quartet from St. Petersburg returns to Boston area this fall, with two brilliant concerts featuring music by Prokofiev, Rimsky-Korsakov, Barber and Shostakovich in Newburyport and Somerville, on October 16th and 22nd 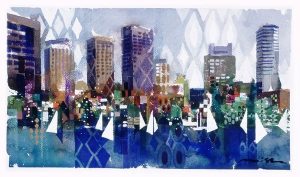 The Museum of Russian Icons (www.museumofrussianicons.org) in Clinton, MA, featuring their unique in the United States collection, will celebrate its 10th Anniversary with an Open House on Saturday, October 15th. From Russia with Art Gallery partnered with the Museum, Russian Matryoshka Club and Russian-American Cultural Center of Boston in organizing the 1st Annual MA-MAtryoshka Festival on Mother’s Day in Clinton in May 2016 (https://www.facebook.com/MA.MAtryoshka.Festival). Russian folk music, dance, crafts, fine art, souvenirs, food, play and even a mobile sauna attracted more than 600 visitors of all cultures in celebrating Mother’s Day. A 2nd Festival will take place at the Clinton City Hall on Sunday May 14th, 2017, along with a fundraising concert featuring the Silver Age of Russian poetry and culture, which will take place at the Museum of Russian Icons on Sunday, November 13th.

From Russia with Art Gallery, which was founded in 2010 in Cambridge will open its doors with true Russian hospitality for the festivities of two- month long 7th Annual Holiday exhibit. It will take place at 281 Concord Avenue, in the spacious, former Touch Art & Craft Gallery, a 15 minutes walk from Harvard square towards Fresh Pond. The owners, Olesya and Jerry Koenig will host an Opening reception on Wednesday, October 26th with Ukrainian-American Impressionist artist, Signature Member of Oil Painters of America and Master of Pastel Society of America, Anatoly Dverin. Seldom-seen in America etchings (including those by People’s Artist of Russia Stanislav Nikireyev (1932-2007) paintings, mixed media, Russian handicrafts and one-of-a-kind jewelry by Russian-American artists will be available at the Holiday exhibition and on gallery website www.fromrussiawithart.org. During the holiday season, live music, Russian and Ukrainian songs will be performed by Alexander Prokhorov, Olga Lisovskaya and other singers of Commonwealth Lyric Theater, creating a special atmosphere of “Magic of Russia.” 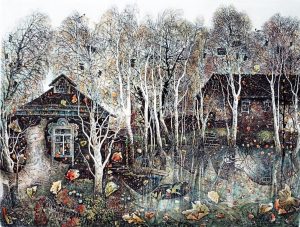 Alexander Vetrov’s “My Childhood Place” colored etching, 1994, on view at the Holiday exhibit.

Russian-American Cultural Center (RACC) of Boston (www.raccbostonma.org) along with its Founder and Director Margaret Coleman, will have a table display at the gallery. Russian tea, pryaniki and pirozhki will be served to our true Russophiles at a Round-table discussion. Margaret Coleman will discuss current educational and research projects of the Center. The Center was founded 23 years ago and is currently based at Manchester-by-the-Sea. It is a non-profit 501©3 educational organization devoted to historical research and cultural programming that promote mutual understanding between Russians and Americans. It plays an active role in connecting people interested in all things Russian with the proper resources and experts.

More exciting news is; an ice skating path and outdoor Holiday Market will be coming to Boston’s City Hall Plaza this December! A European-style Holiday market, with a skating rink will give the plaza a major face-lift and make it more inviting to Bostonians and tourists (https://www.boston.com/news/local-news/2016/09/08/city-hall-plaza-to-feature-ice-skating-path-holiday-shopping-market.) The mix of local and international vendors will open their chalets from December 2-31st to feature seasonal foods, holiday gifts and more. The Russian chalets will offer delicious food, tea, kvas, pastry, as well as handicrafts, traditional souvenirs, Matryoshki nesting dolls, jewelry and artworks, all made in Russia!

Classical ballet lovers will definitely enjoy Boston Ballet’s (www.bostonballet.org) Artistic Director Mikko Nissinen’s production of the most famous ballet in the world; the Nutcracker, by Pyotr Ilyich Tchaikovsky. Whether you’re seeing it again or for the first time, the Nutcracker will capture your imagination and bring you back to the magical world of childhood. From the captivating dance of the Sugar Plum Fairy to the iconic snow scene, this enchanting ballet, set to the beloved music of Tchaikovsky, continues to enthrall audiences of all ages. The Nutcracker, which became one of New England’s most beloved holiday events, is on view at Boston Opera House from November 25- December 31st.

The Boston Ballet’s “Russian” season will be concluded with an iconic production of Pyotr Tchaikovsky/Marius Petipa classical ballet “Sleeping Beauty,” from April 28-May 25th, 2017. This masterpiece of classic ballet was created in 1889 and performed for the first time at the famous Mariinsky Theater in Saint Petersburg. Boston Ballet’s iconic production, with luxurious sets and costumes and majestic score will sweep you off your feet. The timeless tale of a beautiful princess awakened by a kiss is not to be missed.

Boston and Moscow are both centers of world class education! As a Russian person who lives in a close proximity to Harvard University and MIT, I really appreciate their Russia and Ukraine-related seminars, lectures, discussions and exhibitions, which are free and open to the public! Davis Center for Russian and Eurasian Studies has a very impressive calendar of events for 2016 (http://daviscenter.fas.harvard.edu/events). The Working Group on the Future of US-Russia Relations at Harvard, partners with the Higher School of Economics in Moscow in discussing the thorniest issues of the bilateral relationship of Russia and America. Opposing the ideology of Cold War, they “engage the latest generation of scholars in face-to-face discussion and debate, innovative analysis and policy recommendations that better reflect the common ground between the United States and Russia that is so often obscured by mistrust.”

Another strong Russian connection could be found at the Massachusetts Institute of Technology’s MISTI Russia program, directed by history professor Elizabeth Wood (http://web.mit.edu/Misti/mit-russia) and launched thanks to generous support of the Skolkovo Foundation. One of the newest programs, launched in spring 2012, it connects MIT students & faculty with companies and research opportunities in Russia. Currently, a charming photography exhibition “Architecture at the End of the Earth” by frequent traveler to the Russian North, professor William Craft Brumfield. It is on view at the MIT School of Architecture & Planning, at 77 Massachusetts Avenue in Cambridge, from September 8 – January 13th, 2017.

All lovers of historic cinema at the beginning of 20th Century would also enjoy this season, “Behind Potemkin: Other Faces of Russian and Soviet Film”, a series at the Harvard Film Archive, from September 11 – November 6, 2016.

Finally, I will mention another strong side of Russians – our passion for math. The Russian School of Mathematics (www.russianschool.com) started their school year in several towns in Greater Boston, attracting many children to their after-school education. Founded by two teachers of mathematics from Saint Petersburg, The Russian School of Mathematics (RSM) opened in 1997 with a goal of creating a unique after-school mathematics program. Their mission was to build a systematic math education based on the traditions of Russia and Europe. It was adapted to the needs of American students. The RSM graduates have achieved impressive results in school, on standardized tests, in college and beyond.

In 1909 Serge Diaghilev’s greatest achievement was his dance company – the Ballets Russes. Innovative music magnified their impact, in particular that of Igor Stravinsky. Famous Impresario, Diaghilev commissioned works from composers such as Claude Debussy, and Sergei Prokofiev, artists such as Vasily Kandinsky, Alexandre Benois, Pablo Picasso, and Henri Matisse, along with costume designers, Léon Bakst and Coco Chanel. Created in Paris a century ago, the productions of the Ballets Russes, revolutionized early 20th-century arts and continues to influence cultural activity today.

Please feel free to contact the author with your comments and suggestions of more events for Russian Seasons in Boston.

By Olesya A. Koenig,