Alexander Vetrov is considered to be one the best colored needle etching artist in Russia. He was born in 1952, in what was then the Moscow Region and is now an area incorporated into the city of Moscow. He acquired much of his techniques and skills while a student at the Moscow Art School and later at the Moscow Institute of Print Making. For his excellent work, he was awarded the special status of an “Honored Artist of Russia” by then Russian President, Vladimir Putin in 2002. His works have been shown in numerous exhibitions and shows in such diverse locations as; Moscow, Milan, Italy, Hamburg & Meldorf, Germany, Washington, D.C., Boston, Chicago and Montreal, Canada. His works are detailed pictures, panoramas of difficult but beautiful compositions. He handles details in symphony with nature and the accuracy of what he sees. He uses color tactfully and in a competent, professional manner, which blends into his etchings, without taking away from the etching itself. Scenes of villages, churches in ruins, his home, his mother, in the different seasons of the year, are all captured by the artist discerning eye in his etchings. Some of his best known works are; “Sunflowers In Suzdal,” made in 1989, “Bridge to Native Roots, Autumn” also made in 1989, “Sunny March in Korkino,” made in 1996, “The Road To Church In Late Winter,” made in 1993, “My Childhood Home‚” “Late Spring,” made in 1991, “My Childhood Home in Autumn,” made in 2001, “My Childhood Place, ” made in 1993, “Our Blossoming Apple Tree,” made in 2007, “Russian Samovars, ” made in 1998, “Flowers For My Love,” made in 2006, “Visions from my Rucksack,” made in 2001, “Mild January. Saint Vladimir Church,” made in 1993 and “Mild Autumn Silence, ” made in 1993. These are but a sampling of the many colored etchings, on display, by Alexander Vetrov. The “From Russia With Art” Gallery in Cambridge, is the exclusive gallery to see and buy his works in New England. You are welcome to visit our gallery and see the outstanding colored etchings of Alexander Vetrov. 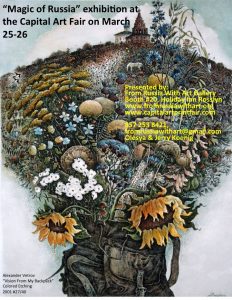