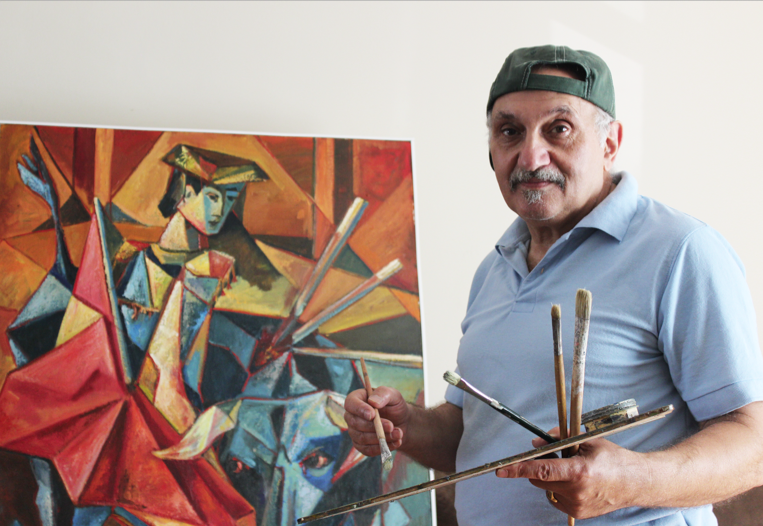 Andrey Allakhverdov is a talented painter of “Eastern” village and city landscapes, still life, portraits, nudes and abstracts. He was born in 1947 in Baku, Soviet Union, into an Armenian family. From the time he was 14 years old, Andrey was practicing drawing and painting. He received his Bachelor’s Degree in Fine Arts from Moscow State Art University for Textile and Design. Andrey is a Member of the Moscow Art Union since 1979 and a Member of the Union of Soviet (Russian) Artists since 1988. Oil paintings by Allakhverdov are done in a several styles such as: neo-realism, surrealism, abstract expressionism, and are distinguished by their striking use of bright colors.

The artist was an apprentice and later a good friend and assistant to the most famous Master of Soviet realism portrait, People’s Artist of the Soviet Union, Dmitry Nalbandyan (1906-1993).

Allakhverdov original oil paintings were exhibited many times at the Moscow Union of Artists in Kuznetsky Most and Manezh Exhibition Halls, as well as in iconic Metropol Hotel and art galleries throughout Russia and abroad. His works are on display in private collections in Russia, Armenia, Azerbaijan, Germany, Greece, Japan, Switzerland and the United States. Andrey currently resides in Boston, MA

Andrey’s first America solo exhibition is on view from October 15-November 9th, with the artist opening reception on Thursday October16th from 5-8PM.  Since 2010,From Russia with Art Gallery offers exhibits and diverse cultural programs to the Cambridge community at large. Armenian-Americans and people of all ethnic backgrounds can enjoy Andrey’s artworks and see that Armenian history and art play a vital part within the rich cultural symphony that is America.