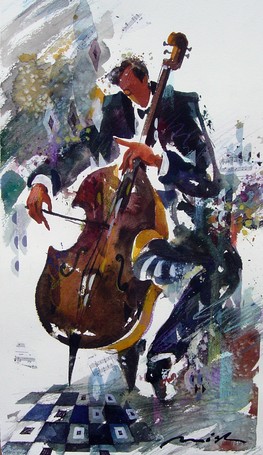 MISHA LENN is a Bostonian, internationally acclaimed, award-winning artist who has developed a distinguished style of watercolor painting.  In 2005 Misha was named the “Best Watercolor Artist” by ARTV Fine Art Awards in North America. His watercolors can be found in private and museum collections around the world: United States , Russia, Germany ,Canada, France, Sweden, Spain, Israel and Monaco. The list of Artist clients includes Calvin Klein, DKNY, Harvard University, Boston Symphony Orchestra, Boston Ballet, etc. He was selected as an official Artist for Boston Marathon in 2012.
Misha received his master’s degree from prestigious Academy of Art and Design in St. Petersburg, Russia.  He creates the art of movement, calling his watercolor style “realistic illusion in motion”.  His mission is to create, stimulate and celebrate the art of sophistication- emotionally, physically and intellectually. Misha’s art challenges every day realities and inspires enjoyment of life’s every day moments.

At the early age, while studying music, Misha found that he had an inclination to draw.  His musical interest still manifests itself in his jazz piano playing in his spare time, and also appears in his art in the form of musical scores collaged into his paintings — an element that has become his artistic trademark.
FROM RUSSIA WITH ART Gallery is happy to present original watercolors, lithographs, offset prints and mixed media by Misha Lenn , in affordable price ranges, to Cambridge and Boston art lovers and collectors.