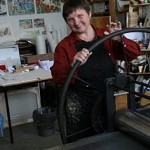 Irina Makoveeva is considered to be the best animal etching artist in Russia. She was born in 1954, in the northern Russian City of Arkhangelsk and has lived in the Moscow Region since being a young girl. She studied art at the Moscow Pedagogical Institute, graduating in 1976 and started working as an artist in 1977. In 1981, she completed art courses and graduated from the Moscow House of Journalists. She has always had a fondness for animals and enjoys capturing their images in her etchings. For her prolific and excellent work, she was awarded the special status of an “Honored Artist of Russia” by then Russian President, Vladimir Putin, in 2005. She is also a member of the Russian Artists Union, since 1981, which counts among its members the best Russian artists.

Her works have been shown in numerous exhibitions and shows in such diverse locations as; Moscow, Saint Petersburg, La Valetta, Malta, Varna, Bulgaria, Barcelona, Spain, Bonn, Germany, Paris, France, Milan, Italy, as well as over six shows or exhibitions in London. In 2005, at the 12th Annual International Awards and Exhibitions Show in Australia, Irina was awarded the top prize for the best miniature etching, Edipo. In 2008, as a reward for her excellent work, she was given a stipend by the Russian Ministry of Culture. For the past five years, in conjunction with Moscow House of Graphics, Irina teaches young artists and organizes competitions, as well as cooperating with the Russian Culture TV channel. She also hosts a TV show, “Bibigon” on Russian Childrens TV chanel. In 2008, she received a medal from the Moscow Association of Hunters and Fishermen, for her etching series on “Hunting Dogs.” Her works on wild animals, many of the different breeds of dogs and cats, farm animals, birds and different types of insects are exceptional. Some of our favorites, in addition to “Edipo” are the “Hen & Chicks,” Company of Bullfinches, “A Trio of Bullfinches on A Branch,” and “Five Bullfinches, “. Her etchings of cats and dogs show them as they are not usually shown. She also shows various wild animals in nature, from hunting prey, to nurturing their offspring, as well as sleeping and eating. In addition her works on insects are different and exceptionally excellent. Irina has permanent exhibitions at the Pushkin State Art Museum, the Darvin State Museum, Timiryazev State Biological Museum and in the Etchings and Art Department of the Russian State Library.

Irina Makoveeva’s “Little Things” Exhibition was on view at Children’s Hospital, 300 Longwood Avenue, Boston, from October 1 – November 30, 2010. She also had an exhibition at the Yawkey Pavilion at Mass General Hospital until May 15, 2011. The From Russia With Art Gallery, is the exclusive gallery to see and buy her works in New England.  You may visit our exhibit locations in person, or search this website for works by I. Makoveeva.