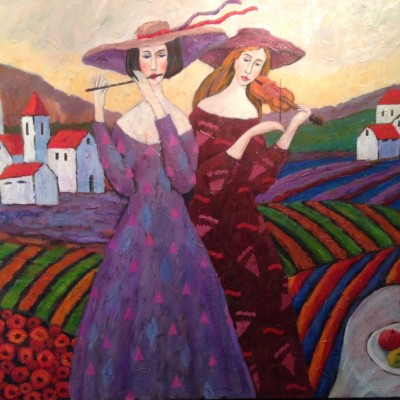 Born in Moscow, Alexander Khomsky started to paint at an early age. He is a graduate of Russia’s world-renowned Stroganoff Institute of Decorative and Applied Arts (Moscow) from which he received a MFA.

After the completion of his formal training, Alex worked as an Interior Designer and Mural Artist for decorative art shops of the Russian Federation Art Fund, continuing to master his technique. He developed an interest in modern contemporary art and was accepted in the prestigious Union of Graphic Artists, an alternative organization which supported new art, as well as vanguard and underground artists, whose work was more difficult to promote during communist-era Russia. Through the Union Alex had the opportunity to show his work in the West at shows sponsored by a variety of art institutions and galleries in Moscow and around Europe.

In 1989 his work was included in a very important show of Russian avant-garde artists in Bonn, Germany called Bonn-Moscow: Russian Vanguard Art. The work shown represented the most important Russian vanguard artists, including Krasnopevtsev, Zverev and Nemuhin. The show, organized in conjunction with the first visit of Russian President Mikhael Gorbachev to Germany, was widely acclaimed in the German press and attended by top German officials including Chancellor Helmut Kholl.

Seeking more artistic freedom, Alex moved to the US in the 1990’s. He currently resides in Arlington, MA.    Alex’s work has been exhibited in over 60 solo and group shows in the US, Canada and Europe, including the Mixed Media Gallery in New York and the InterArt Gallery Reigh in Cologne, Germany.

Several of Alex’s paintings were included in the San Francisco show at the One Bush Street Gallery Identities Lost and Found: Russian Jewish Artists from the 1920’s – 1990’s hanging alongside that of Marc Chagall, Komar and Melamid among others, as well as the show Glasnost under Glass, a traveling exhibition of important Russian art sponsored by Ohio State University.

Artist has gained respect and a solid reputation internationally, particularly within avant-garde circles. Khomsky and his art have been reviewed in a variety of US and European publications: LA Times, Fine Art Magazine, Art Business News, Art & Frame Review, and about 20 others.

The From Russia With Art Gallery, in Cambridge, is happy to present in New England original oil and acrylic on canvas paintings, as well as mixed media by Alex Khomsky, at the “From Moscow To Manchester-By-The-Sea Art and Culture Exhibit” from July 26 – August 4.

There are no reviews yet, would you like to submit yours?

Be the first to review “Sounds of Music” Cancel reply