ArtDaily: 100 years of Russian print-making & etchings to be shown at the upcoming Brooklyn Antiquarian Book Fair 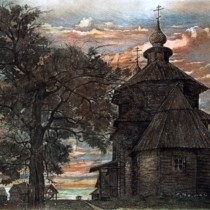 BROOKLYN, NY.- It appears that revolutionary ideas in society and revolutionary ideas in art develop simultaneously, “observes OLesya Koenig, co-owner with her husband Jerry Koenig of the From Russia with Art gallery. “Political ideas emanating from the 1917 Russian Revolution quickly found their way into art movements such as Constructivism and Suprematism, producing startling new original works of enduring quality, while maintaining realism in art –an important vision of everyday life.

From Russia with Art will be featuring a curated collection of works on paper by leading artists from this important time period at the upcoming Brooklyn Antiquarian Book Fair, (BABF), Sept. 8 & 9 at the Brooklyn Expo Center in Greenpoint. The Cambridge, Mass art gallery will have on display and for sale, etchings and prints from such major artists as Stanislav Nikireev, Alexander Vetrov, and Vladimir Vorobyov, in the BABF’s new fair-within-a-fair section, “The Brooklyn Print & Photo Fair. “Some of Russia’s best artists have focused their creative energy mastering printmaking, particularly etching – and the results are breathtaking, but hard to find in this country,” says Ms. Koenig. From Russia With Art is helping to change that.

Stanislav Nikiereev (1932-2007), known as the “People’s Artist of Russia,” was one of the most remarkable Masters of modern Russian Fine Arts. Experts consider his incredibly detailed works as a unique phenomenon in current landscape art and etching technique, to be compared only with the legacy of old Masters, such as Albrecht Durer, Rembrandt van Rijn and especially Pieter Brueghel the Elder.

Etchings, aquatints and dry points (an engraving or print made with a dry point needle), rarely seen in the United States, by “Honored Artists of Russia” – Aleander Vetrov, an outstanding colored-etching craftsman; Vladimir Vorobyov and Irina Makoveeva; will also be presented as part of the BABF exhibition. Vetrov, Vorobyov and Makoveeva have had exhibitions in America and Europe. From Russia with Art will also feature rarely seen original works on paper (pastels, mixed media, drawings) by an important Italian-American modernist August Mosca (1909-2002,) created by the artist in the 1940s-1970s, as well as the rich color oil paintings by St. Petersburg artist, Grigory Samson, who explored a variety of styles throughout his life from Cubism to Surrealism.

One hundred years ago, Russian art brought a revolutionary vision to the world and was eagerly grasped and appreciated by American and European artists working throughout the world. It was a major contribution and endures today. As Olesya Koenig says, “Art is organically interwoven into the fabric of life, whether in times of political change and uncertainty, or more stable eras in which we can contemplate how, so often, art shows the way.

From Russia With Art exhibit at BABF, at Booth #500.