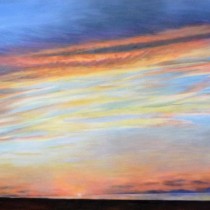 Press Release for the exhibit
What: 2nd “From Russia with Art” Summer exhibit of original paintings, etchings and dry points by Russian and American artists
When: July 6-August 3rd, Artist receptions on Saturdays July 16 and 30th from 9 30-11 30 AM
Where: Santander Bank, 17 Union Street, Manchester-by-the-Sea, MA, 01944, 978 526 9096
From Russia with Art Gallery is proud to present four great artists at the traditional Summer exhibition at Manchester-by-the-Sea, in walking distance from the famous Singing Beach.
Original acrylic on canvas paintings of surrounding nature by Bostonian artist Jim Kociuba (Rhode Island School of Design) will be shown for the first time to the Cape Ann audience. As the Artist says: ”My interest is in the wetland environments that most commuters pass by each day with little notice. These places are filled with plants and creatures of all sizes which depend on their fragile habitats for nourishment and protection. I am hoping to bring the viewer closer to this natural world that we tend to hurry by every day.”
Three Honored Artists of Russia Alexander Vetrov, Vladimir Vorobyov and Irena Makoveeva will present their etchings that embody the seasons, Russian village, nature and its creatures with the mastery of Moscow graphics school and with the stunning detail.
At the great Manchester-by-the-Sea location, in walking distance from commuter rail station, From Russia with Art Gallery is privileged to present 22 original pieces for the exhibition and sale from July 6-August 3rd.
Open on Mon-Thu from 9-4PM, Fri from 9-5PM and Saturday from 9AM-noon. The artist receptions with Jim Kociuba, Olesya and Jerry Koenig, and Peggy Coleman, the Director of Russian-American Cultural Center will take place on Saturdays July 16th and 30th from 9 30 AM- 11 30 AM.
Happy summer!