MAGIC OF RUSSIA: Exhibition of seldom-seen Russian etchings from August 19-September 18th at the Green Lion Print Gallery, Bath, ME 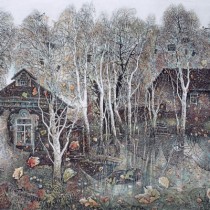 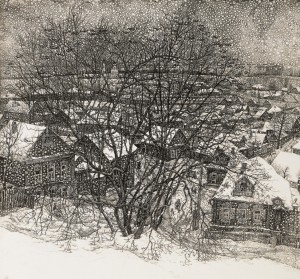 Some of Russia’s best artists have focused their creative energy mastering printmaking, particularly etching – and the results are breathtaking, but hard to find in this country. The Green Lion Gallery in Bath, ME is helping to change that, with an exhibition of etchings and other prints by some of Russia’s leading artists.

The show will feature work by Stanislav Nikireyev, Alexander Vetrov, Vladimir Vorobyov, and Irina Makoveeva, well-known artists in the Russian and international art world. People’s Artist of Russia Stanislav Nikireyev (1932-2007,) a Member of Russian Academy of Art, was one of the most remarkable Masters of modern Russian Fine Arts. Experts consider his incredibly detailed works as a unique phenomenon in current landscape art and etching technique, to be compared only with the legacy of old Masters, such as Albrecht Durer, Rembrandt van Rijn and especially Pieter Brueghel the Elder. Moscow artists Alexander Vetrov, Irena Makoveeva and Vladimir Vorobyov have been awarded the title of Honored Artist of Russia.

Stanislav Nikireyev once said, of his own work: “Some people wrongly take realistic art for a simple matter. Yet, a creative work should be regarded as realistic one if only it absorbs the spirit and the joie de vivre and pains of time. Its aesthetics, while rooted in a tradition, is impregnated with up-to-date trends and open not only for art experts and connoisseurs, but for the general public as well.”

The exhibition is curated by Jerry and Olesya Koenig of Cambridge, MA. Olesya and Jerry are Russian art experts, collectors and owners of From Russia With Art gallery (www.fromrussiawithart.org) in Cambridge. Works on display at the Green Lion will include etching, drypoint, aquatint, and other works that they just brought back from a recent trip to Russia.

There will be an opening reception on Friday, August 19 from 4 to 7 pm, in conjunction with the Bath Art Walks, and the show will be on display through September 18.

The Green Lion (www.greenlionart.com) is a new gallery and working art studio in Bath that specializes in handmade, limited-edition fine art prints, including woodcuts, wood engravings, etchings, lithographs, and other work created by hand and individually printed.  In addition to the Russian work on display, the gallery currently represents other print artists from as far away as New Mexico and Wales, although most (including artist/owner David Morgan) are from Maine.  It also shows historic prints and other unusual artwork from the 18th to the 21st centuries.